A sobering new report from the Brookings Institute shows homes owned by black Americans are undervalued by billions of dollars and it’s having a domino effect on American families when it comes to paying for education and retiring. Ali Velshi is joined by one of the report’s authors, Andre Perry, to discuss the “segregation tax” that is limiting opportunities for African-Americans.

Black Americans, long accustomed to facing more hurdles on the road to homeownership, may consistently find their investments in residential property undervalued, according to a new joint Brookings Institution and Gallup study. According to “The devaluation of assets in black neighborhoods: The case of residential property,” owner-occupied homes are undervalued by the real estate market across all majority-black neighborhoods, and consistently sell or are appraised for lower prices, at an average of $48,000 per home. Nationwide, this amounts to $156 billion in cumulative losses, what the report dubs a “segregation tax.” Furthermore, homes of similar value with similar features are valued at 23 percent less in majority-black neighborhoods compared to those with very few or no black residents. The researchers noted that, while some of the majority-black neighborhoods they examined exhibited features associated with lower property values, including higher crime rates, longer commute times, and less access to high-scoring schools and well-rated restaurants, their analysis shows that these factors only explain roughly half of the undervaluation.

Even taking into account the fact that housing stock in majority-black neighborhoods tends to be older and have less space or fewer bedrooms than comparable homes in the same market does not fully account for the differences in housing values. “We believe anti-black bias is the reason this undervaluation happens, and we hope to better understand the precise beliefs and behaviors that drive this process in future research,” the report says. Researchers Andre Perry, Jonathan Rothwell, and David Harshbarger used the 2016 American Community Survey and Zillow to determine neighborhood demographics and property values for the 119 metropolitan areas with majority black neighborhoods. This systemic devaluation puts black families at significant disadvantage when it comes to wealth accrual, making it harder to pay for education, start businesses, or retire. In addition, the report found that areas with greater devaluation are more segregated and produce less upward mobility for black children. Conversely, black children born to low-income families had higher incomes as adults if they grew up in a metro area where black homeowners’ properties were valued more in line with the standard market value. 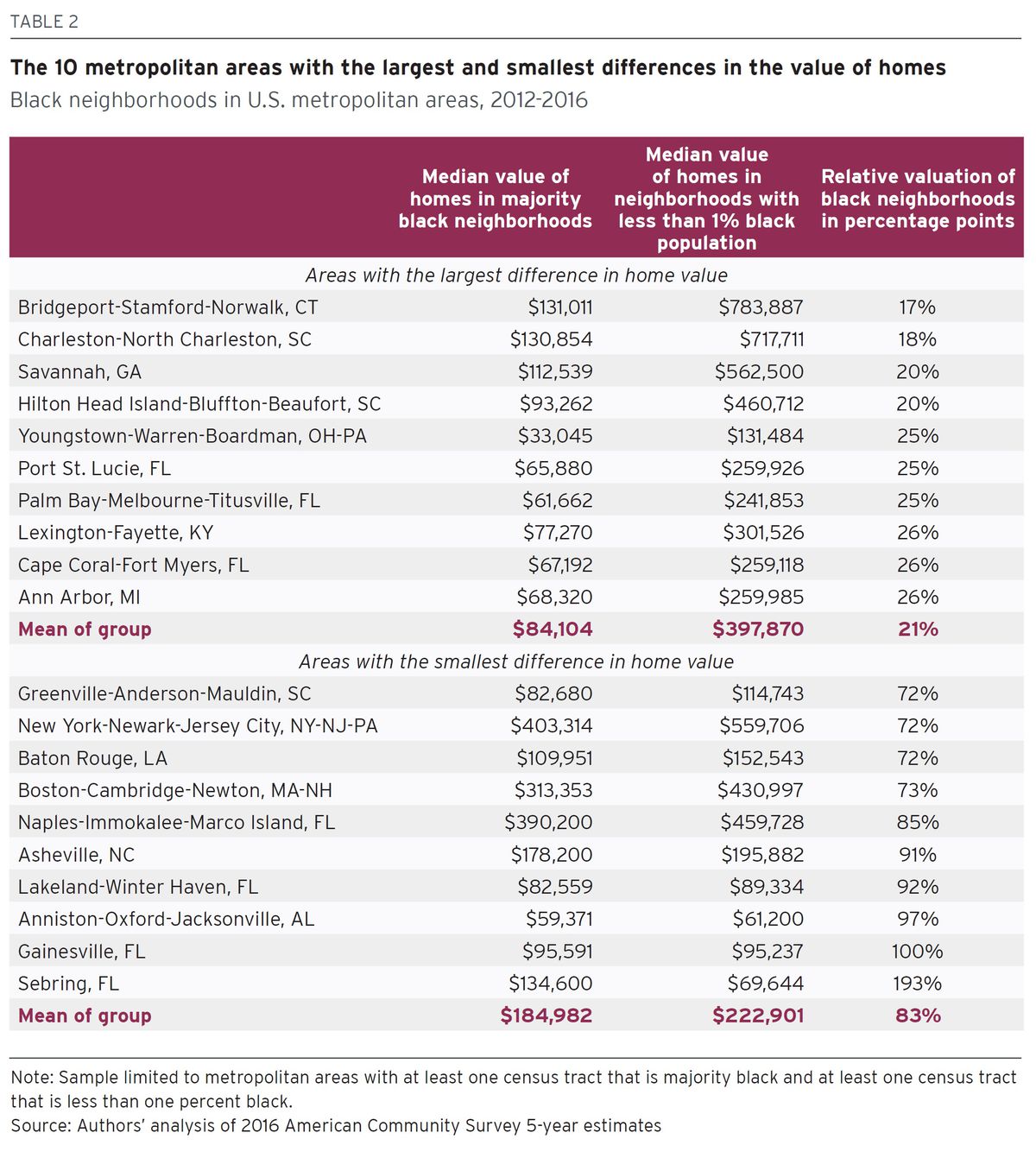 Communities also pay a steep price. Across the country, majority-black neighborhoods contain a total of $609 billion in owner-occupied housing assets, 10,000 public schools, and more than 3 million businesses. Devaluation of these assets further penalizes communities, since these businesses often form the tax base that supports and funds local education and infrastructure. These findings highlight the consequences of orienting U.S. housing policy to favor homeownership and champion the single-family home as an instrument of wealth creation and family stability. Combined with a history of racist and exclusionary policies, including redlining and housing covenants, this policy choice has created a gap in homeownership between white and black Americans, locking black families out of a significant source of long-term wealth creation. The gap is persistent, and widening; half a century after the Fair Housing Act was supposed to help correct this historical injustice, the gap is wider than ever, with just 42.3 percent of black Americans owning homes.