Alecia Smith been a UNC undergraduate student since 2011, and in those years, I have walked past the statue more times than I can recall. The statue is a reminder of the White supremacist history of this campus. But beyond that, its permitted survival and prominent display despite decades of protest have served as a constant reminder of the tremendous extent to which university administration values certain interests (and donors) more than it values students, faculty and staff of color. So when finally, this statue found its face on the ground, I allowed myself to feel joy for a few minutes. Then I logged onto Facebook. And against my better judgment, I read strangers’ comments on the issue. For every person proud and elated over the statue’s fall, there was another equally furious. Some veiled their frustrations behind an alleged simple affinity for law and order, but others were upset for reasons that were clearly far more personal. The passion of these people in which few live in town and far fewer of whom have ever attended the university, seemed like such lunacy to me. I read these comments and watched footage of pro-Sam groups as they arrived on campus, and I wondered, in unsophisticated terms, why are you like this?

Students reportedly numbering in the hundreds, as well as faculty members and area residents, thronged the statue known as Silent Sam while a group of police officers created a perimeter around them. A number of counterprotesters, some of whom wore Confederate flag T-shirts, were seen arguing with student protesters. There were no reports of physical altercations.The protesters used a rope to pull the monument to the ground, student paper The Daily Tar Heel reported. Silent Sam was toppled at around 9:20 p.m. “Next up, Charlottesville!” protesters shouted as they felled the statue.

Erected in 1913 and funded by the United Daughters of the Confederacy, Silent Sam has been a target of vandalism and protests for decades. In April, UNC doctoral student Maya Little was arrested after dousing the statue with red ink and her own blood.

According to The Raleigh News & Observer, Monday’s student demonstration began as a gathering to support Little, who faces criminal and honor court charges for her protest. But the off-campus event “quickly morphed into a march to the UNC campus, where police officers stood at the monument,” the newspaper reported. “It’s time to build monuments to honor those who have been murdered by white supremacy,” Little told the crowd at one point during the rally. “It’s time to tear down Silent Sam. It’s time to tear down UNC’s institutional white supremacy.” Controversies surrounded Sam throughout the 20th century, evidenced by senior student P.W. Carlton’s 1959 reflection in The Daily Tar Heel on his time as a college student. “Dear old Sam, the object of student wrath and indignity for better than 100 years, stands stolidly upon his tarnished pedestal, scrupulously refusing to the meet the eyes of passers by, unruffled by his new coats of blue or green or red paint and by the lingerie displays which frequently dorn his rifle barrel,” Carlton wrote. On May 15, 1908, The UNC Board of Trustees approved a United Daughters of the Confederacy (UDC) request to erect “a handsome and suitable monument on the grounds of our State University, in memory of the Chapel Hill boys, who left college, 1861-1865 and joined our Southern Army in defense of our State.”

Silent Sam was modeled on 16-year-old Harold Langlois, from Boston.  plan called for UDC to finance one-third of the statue’s design and build and install it while alumni and donors paid for the rest. UNC Library archives record Venable as having said in 1910 that UNC-CH would not pay for the memorial. The statue was not completed by 1911 as Venable had hoped and not until 1913 did Wilson complete his casting of the statue. And on June 2, 1913, Silent Sam was dedicated on commencement day with speeches from then Gov. Locke Craig and Confederate Civil War veteran Julian Carr. Carr praised the Confederate Army as the saviors “of the Anglo Saxon race in the South” and recalled “horse-whipp[ing] a negro wench until her skirts hung in shreds” for offending a Caucasian woman on Franklin Street. 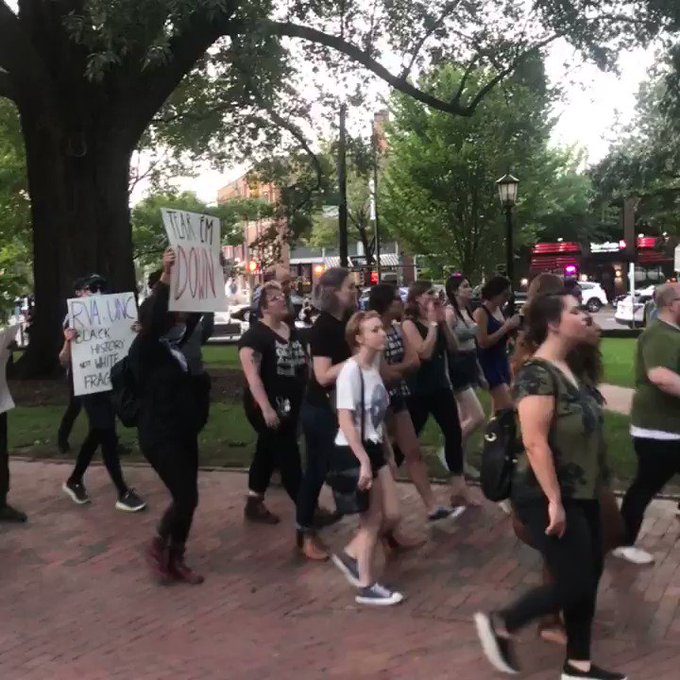 Alecia Smith wanted to know, why there exists a mass of people in this country who very passionately adhere to and behave according to very harmful beliefs rooted in very irrational fears. And as much as I’d like to write these people off as hopelessly ignorant, I as a researcher, a Black woman and a human who wants to help create a better and safer country for all people, have to try to understand where these people are coming from. So I asked. But as a Black woman, I couldn’t expect honest answers from White advocates for Silent Sam. So I pretended to be a White woman. I created a Facebook profile appearing as a conservative White female student. Then I scrolled the comments of local news articles on Silent Sam, seeking comments from people angry over the fall of the statue. I ignored comments strictly discussing the legality of the issue, factual or otherwise. I looked for comments from people demanding the return of the statue to UNC’s campus because of what it represented. Then I sent each of those people a message. I told them I was a conservative student at UNC and was writing a paper to highlight the pro-Sam perspectives often overlooked on “UNC’s liberal campus.” The profile was clearly fake, with no listed friends, and no pictures other than a profile photo of Sam and a cover photo of a Confederate flag displaying the punchy falsehood: “heritage not hate.” So I explained away the inauthenticity of the profile.

I told my new friends I had created this fake identity because as a conservative student on UNC’s liberal campus, I did not feel comfortable using my real identity to write a Confederate-sympathizing paper, as I’d be ostracized by my peers. My new friends on this page quickly bought into the lie. More than one even said I’d get kicked out of school if the administration discovered my “true” conservative identity! In the message I sent these pro-Sam individuals, I asked why they felt the statue should be returned to campus and how they felt about the students who destroyed it. And as a “White woman,” I was met with what I believe were honest answers. As a first line of defense, Sam supporters were insistent that the statue existed irrelevant of slavery, while simultaneously attempting to educate me on the “true” history of slavery. Beyond the (allegedly undue) focus on slavery, respondents lamented what they viewed as a general miseducation of UNC students and liberal Americans in general. They encouraged me, the innocent White student, to hold fast to my values or even escape the university before I was brainwashed to misunderstand American history.

Respondents warned me of the country’s impending destruction, as “they will be invading your home and business next.” Who is they, exactly? If I had to guess, I’d say they are liberals, Black Americans or liberal Black Americans. But I didn’t have to guess. These respondents made it very clear who they are. One respondent raved, “it their [sic] can’t be white supremacy there certainly can’t be black supremacy! I’ve experienced so much hate from blacks but we’re racist? You can’t say anything against blacks…The world has lost it!!” Erased cultural histories, consequences for disparaging remarks, perceived race-based hatred, whether White conservative Americans realize it or not, they are terrified of what they view as a minoritization of their race.

It was an interesting feeling for me, posing as a White woman, to pretend to be afraid of the real me, a Black woman, in order to engage with these respondents. As a Black woman, my friends and family, my ancestors and I have always existed in a state of constant confrontation with the harms these respondents imagine themselves to be facing now. The reality is that there is no threat to the sociopolitical dominance of White Americans, and this dominance will remain unthreatened whether or not Silent Sam returns to UNC’s campus. But I have written today about a group of people who feel genuine fear and believe beyond any doubt that their lives and their values are in critical danger. Years of systems and interactions, or lack thereof, have allowed these fears to cultivate to the violent, intractable level we see today. I am somewhat flattered that we and other advocates for our safety and just treatment have so clearly challenged American practices rooted in racism that Confederate apologists feel their world is literally falling apart. But I also recognize that the palpable fear felt by these respondents and like-minded others is neither healthy nor safe for anyone.

North Carolina, along with a number of other southern states, has in recent years strengthened its laws protecting Confederate statues. In 2015, then-Gov. Pat McCrory (R) signed a bill that prohibited state agencies and local governments from dismantling any “object of remembrance” on public property that “commemorates an event, a person or military service that is part of North Carolina’s history.” Only the General Assembly has the power to remove such a monument. Reacting to the news of Silent Sam’s dismantling, North Carolina Gov. Roy Cooper (D) said in a statement that while he “understands that many people are frustrated by the pace of change” and that he shares their frustration, “violent destruction of public property has no place in our communities.”  The toppling of Silent Sam comes one year after a group of activists pulled down a Confederate statue in nearby Durham. Although the activists were arrested and charged for toppling the monument, a judge later dismissed all charges against them and the statue was never put back up. In June, the Southern Poverty Law Center said that at least 110 Confederate monuments and symbols had been removed from public spaces across the United States since 2015 when a white supremacist opened fire in one of America’s oldest black churches and killed nine people.

“My people have been in Orange County since 1750. It’s a piece of me,” says William O’Quinn, post commander of the Durham Sons of Confederate Veterans Camp, seen in soldie’s garb at the statue May 5, 2012. “I don’t understand people today. Most people don’t know their grandparents.”
MARK SCHULTZ mschultz@newsobserver.com

Alecia Smith disdain these respondents felt for anti-Sam protestors is steeped in excessive fear, and it’s clear that such fear leads to harmful, irrational, reactionary behaviors. I hope to see and help create a world in which individuals like these respondents do not feel they need to be afraid of me. I hope that the future sees the phasing out of generations so disengaged with facts and so isolated from interactions with diverse groups that they are able to simmer in unchallenged paranoia. I am proud and thankful for the students of UNC and beyond who come from a variety of backgrounds and have developed an understanding that erasing national pride in this country’s racist history is nothing to fear. I expect the coming years to be tumultuous, as racial diversity continues to increase and the individuals unwilling or unable to educate themselves and adapt accordingly will fight against this change in every breath and keyboard click. I hope and believe in the increased recognition among White conservative Americans that, in short, improving my life and safety will not challenge theirs. Dear respondents and UNC administration frantically trying to justify Sam’s return to campus: I know you don’t believe this, but you’re going to be OK.

Have a compelling first-person story you want to share? Send your story description to press@tpng.biz